Title: Custer: the Seventh Cavalry, and the Little Big Horn - A Bibliography 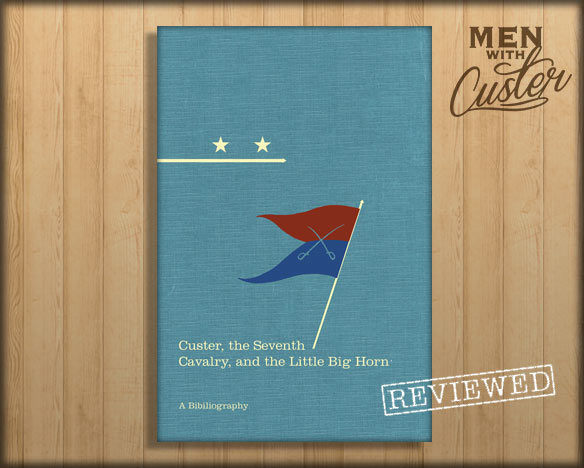 The Battle of the Little Big Horn and related subjects has inspired more literature than almost any other single military event in American history. Books, periodicals, pamphlets, comic books and all types of printed matter fill the shelves of public libraries and personal collections. Some are very good, well-researched efforts while others are plagued with inaccuracies and mistakes. The story also appears in a surprising number of lesser titles. Many Custer “buffs” have confessed to me that their one or two shelves (from rare first editions to paperback reprints) constitutes a “large” collection.

If anything Michael O’Keefe has dispelled this notion with his labour of love, a two-volume bibliography that follows the efforts of earlier Custer historians and collectors.

His helpful introduction relates how the list compiled by Little Big Horn researcher Fred Dustin, first published in 1939 and expanded in 1953, became the basis of all further efforts. It next focuses on Tal Luther, whose “high spots and low spots” provided a critical aid for the discerning reader in all things Custer. Finally it cites the more recent, remarkable bibliography of James Patrick Dowd, which is still a valuable reference work.

These and other compilations truly show the expansive nature of Little Big Horn related literature. Therefore, O’Keefe asks, why do we need another bibliography? The answer is obvious, considering the tremendous amount of new literature such as the archaeological digs at Little Bighorn Battlefield, the well-researched biographies of Custer and recent interest in overlooked accounts by Indians and other participants such as those recorded by Walter M. Camp. Last but not least, the Internet has opened new publishing opportunities as well as expanded research vistas.

O’Keefe notes that this literature developed from the earliest interpretations of Custer as a hero (aided and inspired especially by the efforts of his widow), more critical views after Elizabeth Custer’s death in 1933 and works since the Little Big Horn centennial in 1976.

Some might wonder why choose to review a bibliography? I have compiled Custer bibliographies myself and been the perpetual cataloguer of my own collection and that of others. Thus I well know that this endeavour is more than a mere listing of thousands of titles. O’Keefe has amplified many entries with annotations (and insights) on the varied editions of a book or subject.

A case in point is the fascinating history of the Benteen-Goldin letters, which reveal much about the character of Capt. Frederick W. Benteen.

Students of the Little Big Horn story may be surprised to learn that The Custer Myth (1953) was not the first time that Colonel W.A. Graham (or anyone else) made this historic correspondence public. As O’Keefe has discovered and listed, Graham had, in fact, privately published a limited edition in 1950 based on transcripts of the original letters provided by the journalist E.A. Brininstool.

What Graham did not know is that Brininstool, “a zealous defender of Major Marcus A. Reno, had edited his own typed copy, removing Benteen’s comments that Reno had proposed deserting his seriously wounded troopers at the Little Big Horn on the night of June 25, 1876.” Upon learning this two years later, Graham sent a two page letter of explanation to purchasers of this first edition.

O’Keefe often describes the content of the title and comments on its accuracy or lack thereof. For example, he notes that a photograph of Elizabeth, George and Tom Custer in the first edition of James Horan, Matthew Brady: Historian with a Camera misidentifies Tom as the “son” of the general and his wife. The entry not only states that subsequent editions corrected this error but also refers to an anecdote about it in another book. Such remarkable attention to detail is repeated throughout these volumes!

O’Keefe has chosen to analyse certain titles at length (such as G.E. Lemmon’s “non-book” Developing the West). His many comments as to the publication’s content or historical importance are usually on track, for example, more recent titles such as James Donovan, A Terrible Glory or Nathaniel Philbrick, The Last Stand. (“Outstanding when writing on the sea, Philbrick is lost on the plains.”) However, this reviewer would have preferred more of these insights.

Still no bibliography can be complete (or expected to be) and some items have been overlooked. There are, however, few such omissions. I was consistently amazed by the variety of obscure books and periodicals found and cataloged. My only critique is format. I would have preferred the separation of pamphlets from books.

Libraries should without question acquire these volumes. But why purchase them for your personal use? First, they will enable collectors to discover the elusive “first edition” or rare book. They also offer helpful background information that should inspire further research and writing. Finally, they are a useful reference source for either serious study or mere casual reference.

Whatever the case, we owe a great debt of gratitude to Mike O’Keefe for giving us what is a very substantive addition to the literature of the Little Big Horn by demonstrating how extensive that literature is!

Reviewed by Vincent A. Heier