A Blacksmith from Ballinlough 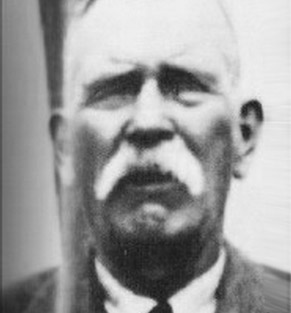 This old blacksmith died within living memory, in 1933, the year Hitler was democratically appointed to power in Germany. He was, by then, the second last survivor* of all of Custer’s men who had been born in the British Isles and participated in the Battle of the Little Big Horn. Daniel Newell passed away at the Soldiers’ Home in Hot Springs, South Dakota, and was buried with full military honours in Bear Butte Cemetery, Sturgis; his hometown for almost 50 years.

The funeral cortege was escorted to the cemetery by an honor guard of both the American Legion and the National Guard, who fired the rifle volley over the old soldier’s grave. Daniel Newell’s long journey, from County Roscommon, Ireland to South Dakota, via London, was finally over.

Newell, one of the thirteen children of Michael Newell, was born in the small town of Ballinlough in Roscommon on St. Patrick’s Day 1847 (his enlistment record suggests it was 1848) and left home at the relatively tender age of 15 in 1862. He travelled to London, got a job as an apprentice blacksmith, and served his time until 21. Newell then worked for himself for two years, probably saving up to pay for the next step of his journey: a passage to the United States.

The young blacksmith landed at New York in 1870 and worked briefly in that city before heading west for Philadelphia. His intention was probably to open his own blacksmith’s shop, but for that Newell needed money for tools, raw materials and a property to work in, and money was one thing he very obviously couldn’t earn enough of by working for someone else. On 8 October 1873 Daniel Newell was enlisted in the U.S. Army by Lt. William Volkmar.

Newell joined the 7th Cavalry’s Company M at Fort Rice, Dakota Territory on 21 October and was company blacksmith by December, which probably gives an idea of the time spent on his basic training-two months. Newell remained company blacksmith for eighteen months, until June 1875, when after reverting to private, he went on detached duty the following month, as blacksmith to the quartermaster’s department where he remained until February 1876.

Daniel Newell was in the field with his company as a private in the Sioux Campaign of 1876 and saw action in both the valley and hilltop fights. His Company M was part of Reno’s battalion, and Newell was wounded in the retreat out of the valley (gunshot wound left thigh), when to become dismounted was tantamount to death. Newell kept in the saddle, survived the river crossing, and made it to the relative safety of Reno Hill. He spent the ensuing two-day siege as a patient in Dr. Porter’s primitive field hospital, lying under a tent flysheet that had been rigged up to shelter the wounded from the blazing sun and with Indian bullets zipping their way through the canvas on a regular basis. In later years Newell was a staunch refuter of the allegation, then and now widespread, that Reno was under the influence of drink during the valley and hilltop fights. “I was close to him [Reno],” Newell stated, “and if he had been the least bit drunk I would have known it.“

Transported back to Fort Abraham Lincoln with the other wounded on the steamer Far West, Newell was back on duty as company blacksmith by November 1876. He fought in the Nez Perce Campaign of 1877 and left the Army at the end of his five-year engagement in October 1878, a private, character ‘good’. Newell made his way to Fort Meade, South Dakota, and was the (civilian) post blacksmith there for the next six years.

On 9 October 1882, aged 35, he had wed the 16 year-old Mary M. Harlow at Fort Meade Chapel: a marriage that would remain childless. The following year they moved to Sturgis. Mary’s English-born father, Edward, was living with the couple at Sturgis in 1900.

Mary, wife of Daniel Newell, is second from the left in this photograph taken ca. 1906. Courtesy of Scott Nelson 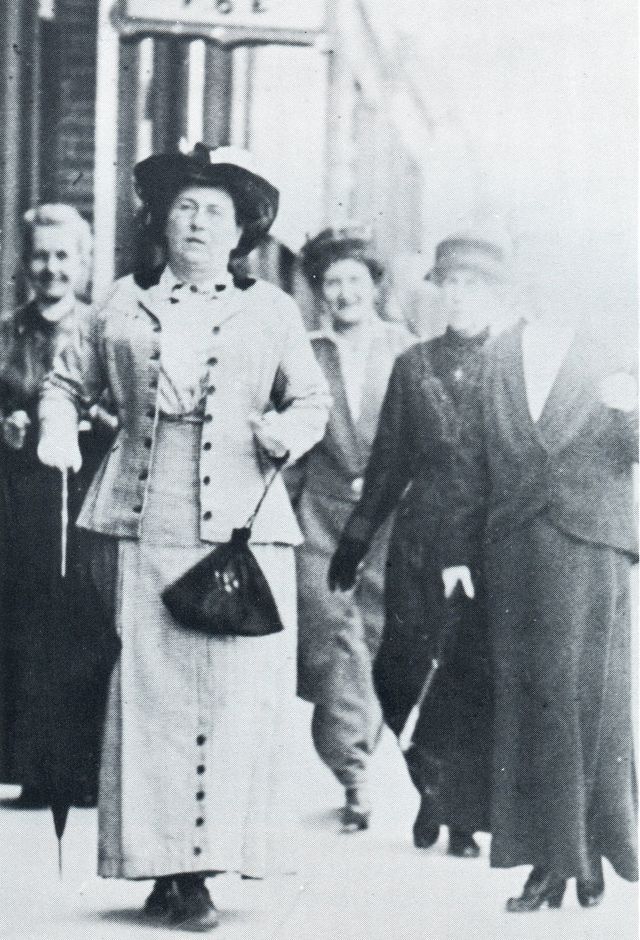 Newell finally set up his own blacksmith’s shop in Sturgis, built a ‘large and comfortable home,’ and quickly settled into the community: serving on the City Council and the School Board. He made many friends, one of whom was State’s Attorney, John P. Everett, who wrote the story of Newell’s military career, which appeared as ‘Bullets, Boots and Saddles’ in the Sunshine Magazine of September 1930.  Newell was also a member of the local lodge of the Ancient Order of United Workers, a fraternal organisation in the USA and Canada.

In 1924, aged 77 and retired on his army pension of $50 per month, Newell was admitted to the Soldiers’ Home in Hot Springs. He was suffering from chronic multiple arthritis, pyorrhea alveolaris (purulent inflammation of the gums and tooth sockets), partial bilateral deafness, and eczema of the right arm and left leg. Newell was subsequently re-admitted in 1925 and 1927, and was living at the Home when the Federal Census of 1930 was taken.  In 1926 however he had been well enough to attend the 50th Anniversary gathering at the Custer Battlefield, along with his wife, where he and the other survivors were presented with Garryowen Medals for bravery.

Mr. and Mrs. D. J. Newell have returned from the big celebration at the Cow Creek Agency in Montana. While away they visited with Mr. and Mrs. J. W. Bullis at Hardin, former residents of Sturgis. They report them nicely located and doing well.

Daniel Newell died at the Soldiers’ Home in Hot Springs on 22 September 1933, of gangrene in the left foot, and senility.  His funeral service was held at St. Thomas Episcopal Church in Sturgis, and began with a soloist singing Tennyson’s Crossing the Bar, a poem which perhaps the old soldier knew, and one which poignantly tells of the ending of a final journey:

Sunset and evening star,
and one clear call for me!
And may there be no moaning of the bar,
when I put out to Sea.
But such a tide as moving seems asleep,
too full for sound and foam,
when that which drew from out the boundless deep
turns again Home.
Twilight and evening bell,
and after that the dark!
And may there be no sadness of farewell,
when I embark.
For though from out our bourne of Time and Place
the flood may bear me far,
I hope to see my Pilot face to face
when I have crost the bar. 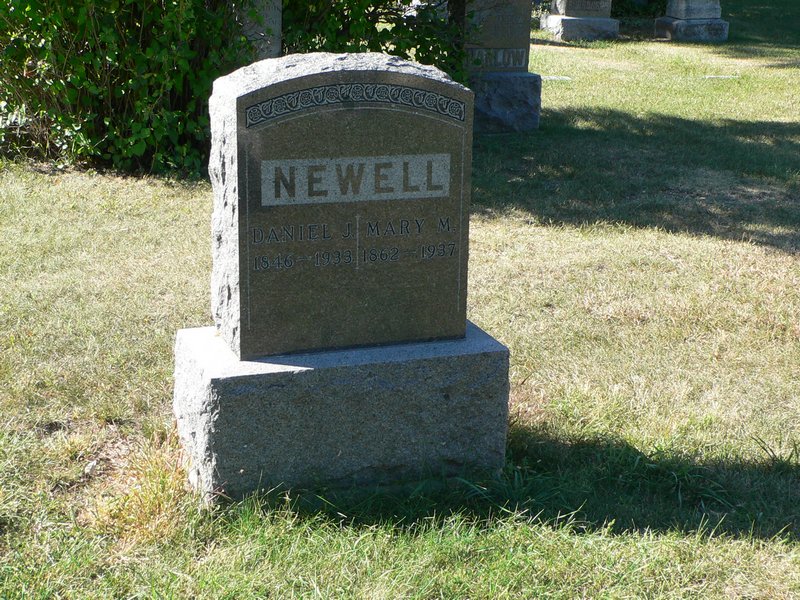 Mary Harlow Newell drew a widow’s pension of $30 per month until her death in 1937. Daniel and Mary lie buried in Bear Butte Cemetery, Sturgis, South Dakota, section 1, lot 120.  Daniel’s year of birth is shown as 1846 on the headstone. 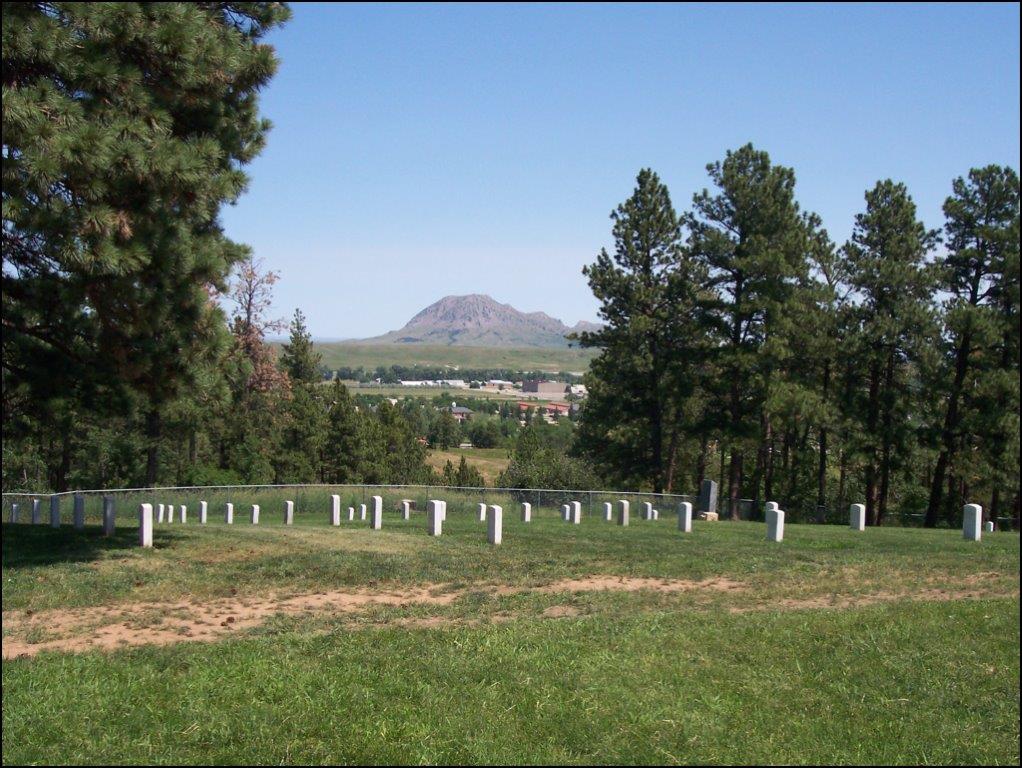 Photograph taken by Peter Russell from the Fort Meade National Cemetery looking towards Bear Butte, with Fort Meade military complex, which includes the Cavalry Museum, in the middle ground. 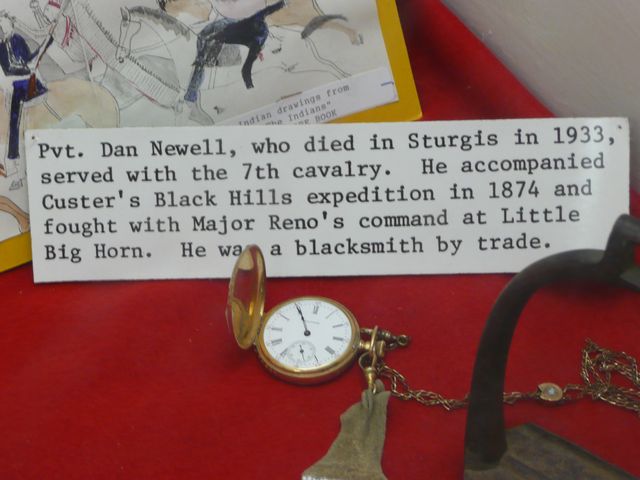 Editor’s Note (*): Manchester-born Private William Gibbs, Company K, died 18 February 1934 at Napa California, see Biography No. 20. However, Private Daniel Sullivan, Company G, from Cork, Ireland, who was on detached service at the Powder River Depot, returned to his native county and died at Ardagilla, near Skibbereen [the southernmost town in Ireland],  on 25 June 1934: 68 years to the day after the battle.  Men With Custer (2010), p. 384, incorrectly gives 1931 as the year of Sullivan’s death and spells ‘Skibbereen’ as ‘Skibbarson.’

While it is considered highly unlikely, one can never entirely rule out the possibility that one or more of the many British and Irish men who served in the 7th Cavalry in June 1876, and whose ultimate fate remains a mystery, returned to the land of their birth and died there sometime after 25 June 1934.

Daniel Newell was not the first from Ballinlough to take up arms in the army of a foreign power.  This small country town was also the birthplace of Andrew O’Reilly, later Count Andreas Graf O’Reilly von Ballinlough (1742-1832), who rose to prominence as a military commander in the service of the Austrian Empire, and was promoted to General der Kavallerie (of Cavalry) on retirement in 1810. He died in Vienna in 1832.